Clare Sargent, the archivist for Radley College, described its 160 year history in her talk to the Society in November. In March, 1847 Robert Corbet Singleton gathered together Rev. William Small, a moral philosopher, Edwin Monk, a musician, and Edmund Wade to “take tea”. Schools were deemed to be out of control and the group’s ideal was to create a school founded on Christian values to civilise boys by surrounding them with beauty and culture. Staff and boys were to be thought equals in learning regardless of age differences. 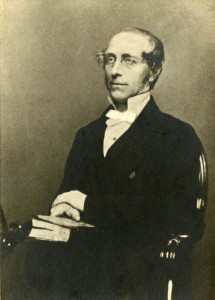 The group established their criteria for a suitable location realising the need for a school to be settled to succeed. Radley Hall, situated in its 1000 year old country estate, with Capability Brown landscaped parkland and pond, just 4 miles from Oxford and 2 miles from Abingdon, near London, railway and river, fulfilled the criteria. The building was leased for 21 years despite its unsuitability to accommodate a school, and the lack of money for the project. Other facilities were provided in the former Jacobean residence on site, still linked to this day by a tunnel to the Hall. An old barn was relocated to provide a schoolroom, a chapel was built , and in 1859 a dormitory constructed with individual cubicles to allow the boys privacy. The boys were to wear academic dress, to be gentlemanly, not luxurious, and self-controlled. Philip Wood was appointed Warden (Head-Master). Fasting was the rule on Sundays and as no jam was provided boys clubbed together to buy  their own. A bell tower was built with the first money raised. After three months there were 4 staff and 3 boys. In time Prefects were established in the Socials (Houses) and in 1863 a choir was formed. Sport was important and continues to be so.

The old schoolroom is now the Library and the old desk lids carved with former boys’ names demonstrate their boredom: the desk space was each one’s valued private space. The College had grown by the 1920’s and has continued to do so. In subsequent years numerous additional buildings have been erected on the site and 690 boys aged from 13 to 18 are currently accommodated.

Former College boys were awarded distinguished medals in each World War: Oswald Austin Read, a wicket keeper while at Radley, was  awarded the Victoria Cross in 1917 for his part in the Battle of Baghdad, and Charles Howard, who was honoured for his bomb disposal work in 1944. In 1940 Eastbourne School chose to relocate to Radley, posing a problem as to which was the home team when they played a rugby match.