We opened the 2014/15 Season on September 11th with a presentation on English Eccentric Sports by Richard O Smith. He is a local historian and comedy writer who contributes to the local press and BBC Radio 4 and has recently written the script for the film The Unbeatables starring Rupert Grint and Rob Brydon.

A wide range of eccentric and humorous competitive sports from Oxfordshire and other counties were described with a series of excellent illustrations, starting with a photo of Nigella Lawson playing Sedan Chair Polo as an undergraduate. Outside England we learnt that Scotland are the current world champions at Elephant Polo. One of our members had seen this in India earlier this year where her husband took part and made two scores. Other sports associated with the University include Tortoise Racing, originating in Corpus Christie in the 18th century and Armchair Dodgems at Wadham in the two decades before the first world war.

Richard described the annual cricket match on an exposed sand bank in the Solent, coincidentally on the very day it took place this year. Water also features in Extreme Ironing where we saw the activity being pursued under water as well as on the top of a high rocky crag.

In the mid nineteenth century Rustic Sports were held in Iffley, including Jingling (covered in bells) for a new hat, Hunting a Greased Pig and Climbing the Greasy Pole to win a leg of mutton. Aunt Sally is well known in our area but how many know it originally involved a live chicken instead of a doll? Over the country many eccentric sports involve food products. We have Pea Throwing in Lewes, Black Pudding Throwing in Ramsbottom, aiming at a pile of Yorkshire puddings just over the county border and there are several Cheese Rolling contests, Onion Eating, Nettle Eating, Pie Eating and Custard Pie Throwing.

Members showed particular interest in Wife Carrying races (Durham and Dorking) where the winner is presented with his wife’s weight in beer. Other races illustrated by Richard included Snail, Pram, Lawnmower, Mountain Bike Chariot and 100m in High Heels. A more comprehensive list of these and other bizarre sports can be found in Richard’s excellent little book on the subject published by The History Press in 2012.

Our next meeting will be on Thursday October 9th when John Brearley will talk about Medieval Craftsmen. Visitors (£3) are most welcome to join us at 7.30p.m. in Function Room1 and tea and coffee are served from 7.00p.m. 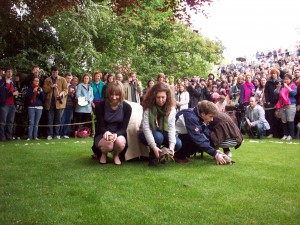 Tortoise Racing, originating in Corpus Christie in the 18th century 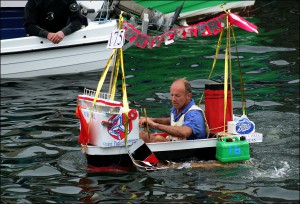