On Thursday 12th September we were all enthralled by the talk given by Simon Wenham on the history of Salters Steamers.

Salters Steamers is a family run business, which was set up in 1858 by brothers John and Stephen. Direct descendants of the family still run the business today. Their first ventures in the boat industry were racing rowing boats, which they supplied to both the Cambridge and Oxford rowing eights. From 1861 to 1869 they supplied the winning boats to the Oxford team. Their last wooden racing rowing boat was used in 1976. They set up their leisure boat industry in 1870 which we still associate with them today. Their stock of boats for hire increased over the period 1850s to the 1890s from nothing to over 900. Some famous people are alleged to have used their boats such as Jerome. K. Jerome, Lewis Caroll and T.E.Lawrence. In 1895 the Lanchester car company tested their engines on their boats due to the restrictions of using powered vehicles on the roads. Boat building remained their prime business based at their boatyard at Folly Bridge in Oxford. Salters received worldwide acclaim with India being the recipients of the vast majority of the boats. They ventured into House Boat building, some of which looked a bit top heavy. Speedboats, coastal motorboats, outboard-engined boats and even landing craft were all part of the vast array of boats built by Salters. The infamous Marchioness was one of Salters Boats. Circular trips, which incorporated land journeys with the GWR, were very popular in the 1930s. Passenger services peaked in the 1970s with the company finding it very difficult to keep to a timetable because of the heavy river traffic. 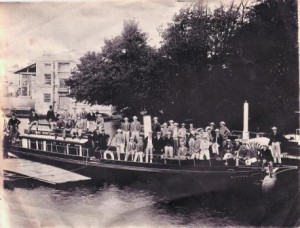